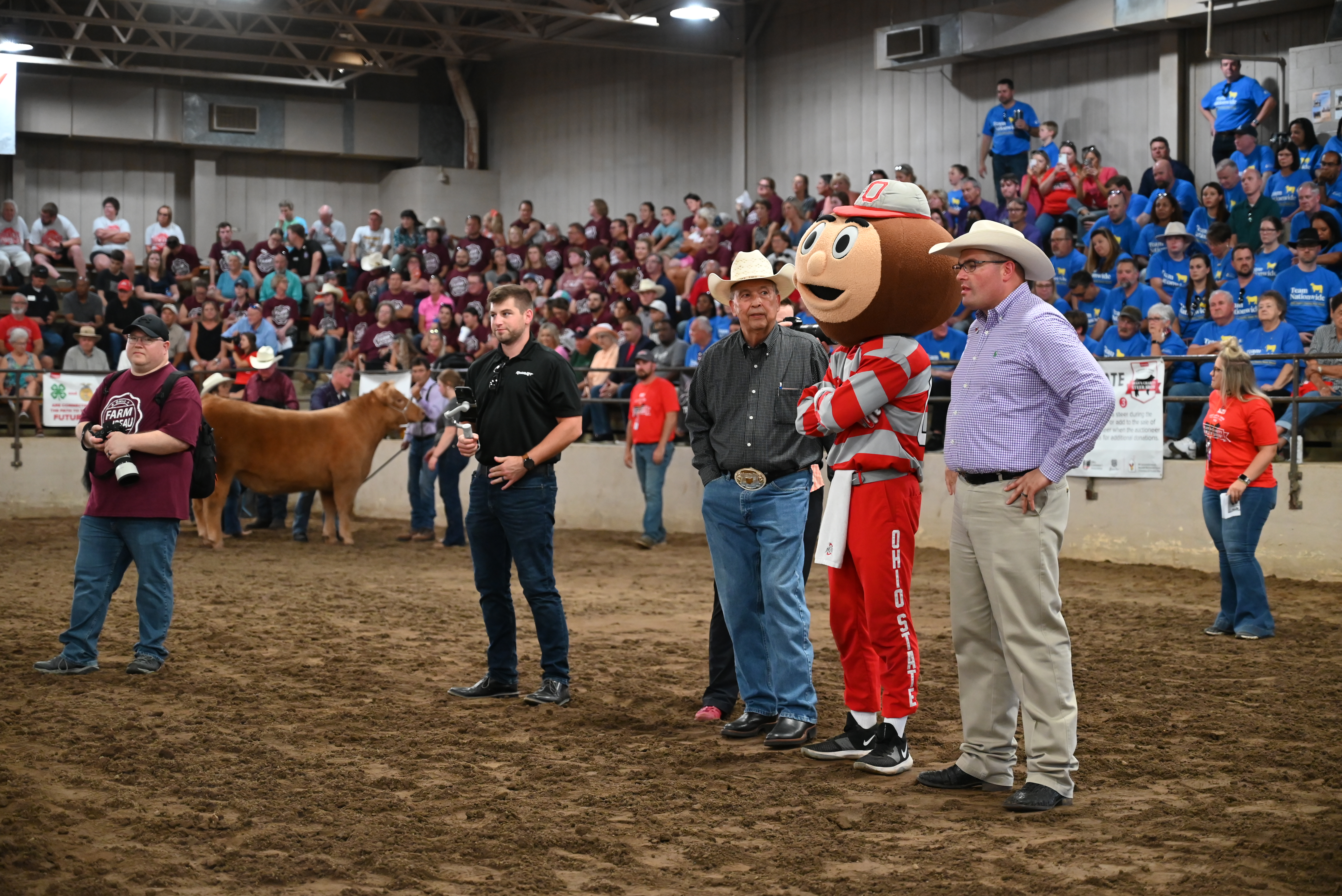 The 2022 Dean’s Charity Steer Show, held at the Ohio State Fair on Tuesday, August 2, raised an astounding $240,000 for the Ronald McDonald House Charities of Central Ohio.

Media personalities, celebrity exhibitors, and 4-H youth, along with their steers, donated their time to raise money and compete for bragging rights in front of a large crowd of supporters in the Cooper Arena.

The show was hosted by The Ohio State University College of Food, Agricultural, and Environmental Sciences (CFAES) and Cathann A. Kress, Ohio State vice president for agricultural administration and dean of CFAES.  It was hosted in partnership with the Ohio Cattlemen's Association (OCA) and TellHio Credit Union.

The president of Ohio State, Kristina M. Johnson, was also in attendance. Clark Donley, news director at Columbus Radio Group, served as emcee of the event.  The final dollar amount raised won’t be available until after all donation pages close on August 31, so if you missed the show, there’s still plenty of time to donate to the worthy cause at give.osu.edu/deanscharitysteershow.

“The Dean’s Charity Steer Show was such a special day for our community in support of Ronald McDonald House Charities of Central Ohio,” said Dee Anders, CEO and executive director of the Columbus house. “We are humbled by the outpouring of support from all of the celebrities, media, sponsors, donors and attendees.”

Following the show, there was a “sale” following the same procedures as a typical livestock sale, but without the actual transfer of livestock. Instead, all bids and sale proceeds were donated to Ronald McDonald House Charities of Central Ohio (RMHC).

“My deepest appreciation to everyone who made the 2022 Dean’s Charity Steer Show a success,” said Kress. “From great partners to outstanding youth, all the donors, those who honored us by watching, and all the helpers. I am overwhelmed by your support, enthusiasm, and friendship. Special thanks to Elizabeth Harsh, Bill Tom, Leslie Bumgarner, Virgil Strickler, Aaron Arnett, Dee Anders, Ryan Wilkins, Darby Jay Walton…and all the other volunteers. The success of this day would not have been possible without Lori Bowman, and Lora Vest, as well as Keith DiDonato, Cody Snyder, and Rob Frost.”

The Dean’s Charity Steer Show is coordinated by CFAES, the Telhio Credit Union, and the Ohio Cattlemen’s Association, and is held in partnership with the Ohio Expo Center and State Fair. At the inaugural show in 2019, approximately $152,000 was raised for RMHC.

Located across the street from Nationwide Children’s Hospital, the Columbus Ronald McDonald House provides not only lodging, but also meals, a place to rest, laundry facilities, an exercise room, informal gathering areas, and activities for siblings of hospitalized children. Each year, more than 82,000 nights of rest are provided to families of seriously ill children.